Harvest season is officially underway, which means more slow-moving farm equipment will be on Indiana’s rural roads. To keep Hoosiers safe this year, state agencies are asking motorists to be alert, patient and responsible, as they share the road with these large vehicles. 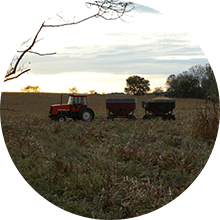 “With more than 14 million acres of farmland, this is a busy time of the year for Indiana and our rural roadways,” said Lt. Governor Suzanne Crouch, Indiana’s Secretary of Agriculture and Rural Development. “We want to encourage every motorist to be aware and exercise caution around farm equipment this season.”

According to the National Highway Traffic Safety Administration, farm equipment vehicles (not including trucks) were involved in 92 fatal crashes across the U.S last year – with six of those incidents occurring in Indiana.

While the term “farm equipment” encompasses a wide range of vehicles, the most common types motorists will encounter include combines, tractors pulling grain carts and large trucks hauling agricultural products.

“Chances are, you’ll see farmers on the road before they see you, so it’s important to know what to do when approaching these vehicles,” said Bruce Kettler, Indiana State Department of Agriculture director. “Patience and allowing extra time for your travels is crucial to keeping everyone safe.”